The Euros have this year been played in stadiums across Europe – 11 in fact, with the final culminating here in the UK at Wembley. Heightsafe have carried out various Compliance Testing and Compliance Inspections for Mansafe Systems and Lightning Protection Systems in stadiums across the country, including The DW Stadium, Old Trafford, Anfield and The Valley. 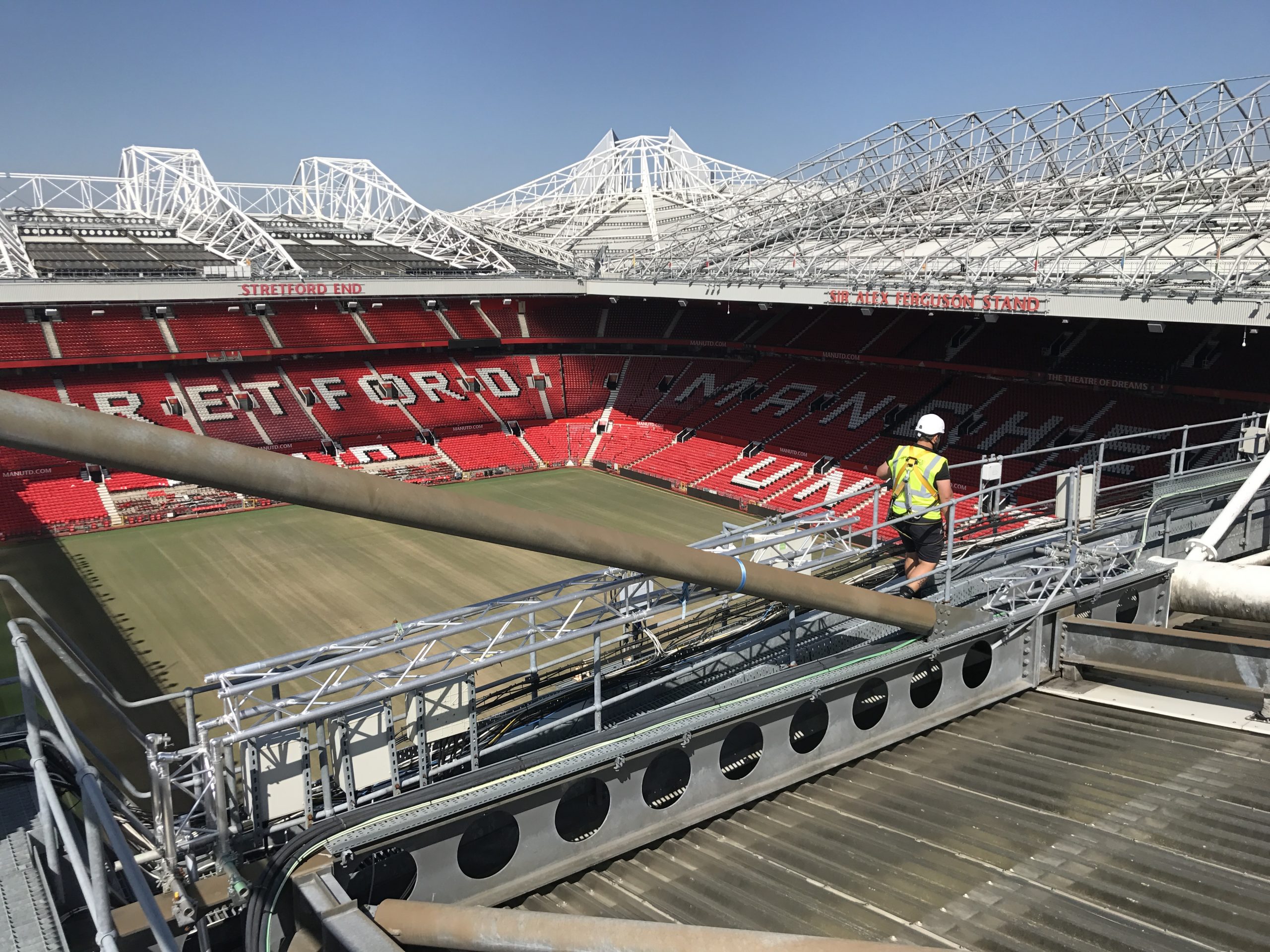 The DW Stadium – previously known as the JJB stadium until 2009 – has been home to Wigan Athletic Football since 1999, after being at their previous stadium Springfield Park for 67 years. The stadium is also home to Wigan Warriors Rugby League Football Club and boasts multi-functional facilities for sporting, corporate, and celebratory events. The stadium was built in 1999, with a capacity of just over 25,000 seats. 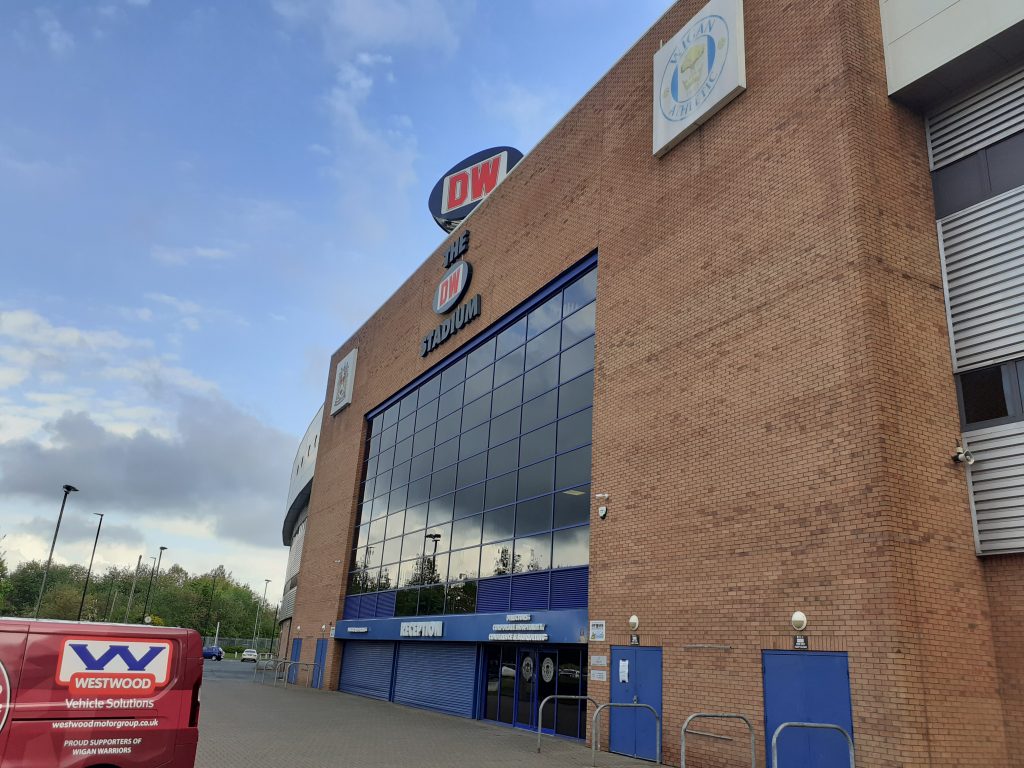 Heightsafe have completed the annual retesting of Safety Lines, and Lightning Protection equipment since 2016 at the DW Stadium, ensuring all Mansafe Systems are fully compliant.

The stadium has 8 safety lines on it’s roofs – 2 on each of the stands. All systems have been checked and tested by Heightsafe for the past 5 years, the systems are tagged with the date of inspection and if there are any repairs to be made, a separate visit was carried out to conduct the remedial works. Any Fall Arrest System that is used as part of a Work at Height systems is recommended to be tested at least once in a 12-month period. All systems must fully comply with BS EN 795:2012. There are a multitude of reasons why safety line systems may need to be repaired or replaced, such as adverse weather conditions like snow causing the line to slacken, or even vegetation growing around the systems if there is not sufficient maintenance so may cause issues when the lines are in use. Vandalism and general wear and tear are also things to look out for and may lead to the systems failing their retest, or if the system has been used in a fall it will need to be replaced. 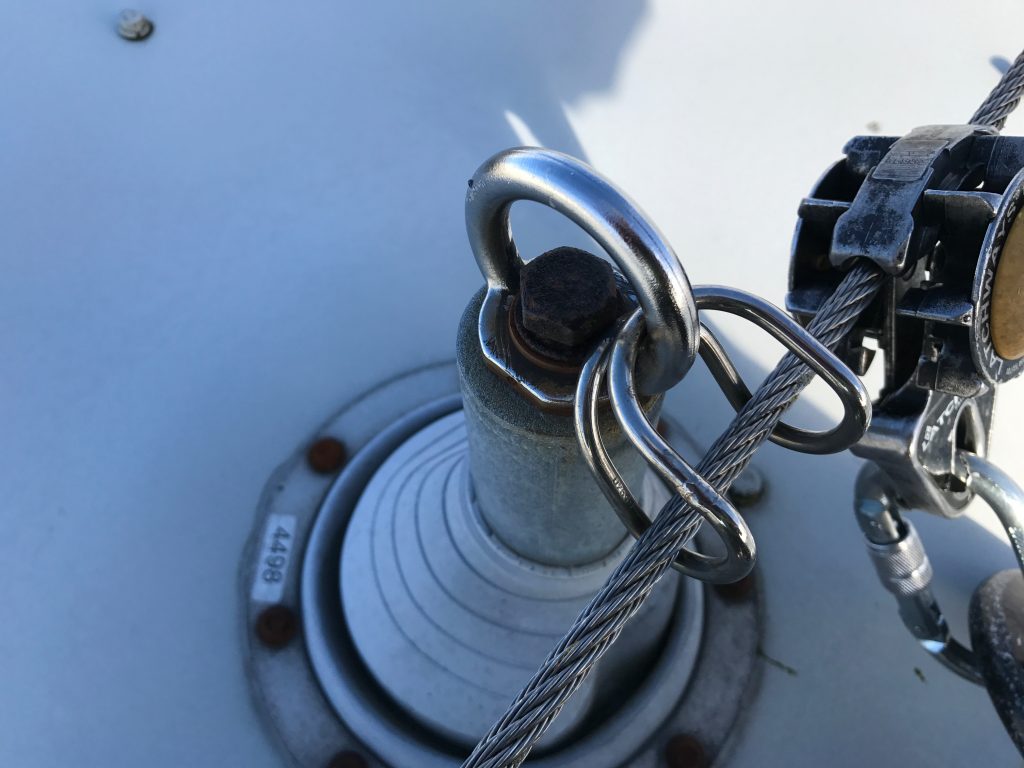 Various other Mansafe testing has been carried out by Heightsafe at the DW Stadium such as Access Ladder Compliance Testing, in which all systems must be secure and safe to use, and so must comply with BS 4211:2005 + A1:2008 (permenantly fixed ladders), BS 5395-3:1985 (industrial type stairs, permenant ladders and walkways), and BS EN 14122 (machinery safety). 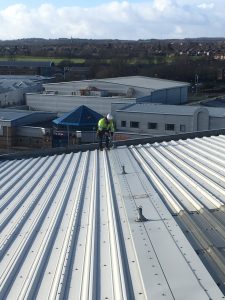 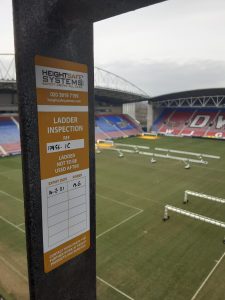 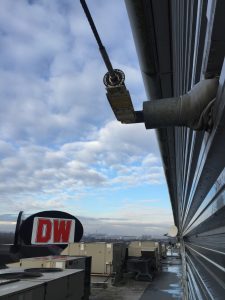 The ‘Theatre of Dreams’ is home to Manchester United, and with a capacity of 75,000 seats it’s the largest stadium in the UK belonging to a club. Old Trafford has hosted The Red Devils since 1910 and has benefitted from various investments and improvements over the years such as better accessibility facilities and upgrades to media systems; the club continue to priorities the experience of their fans as well as the importance of safety for all their visitors. The stadium features a plethora of other events aside from football, from corporate AGM’s and meetings to exhibitions and seminars. 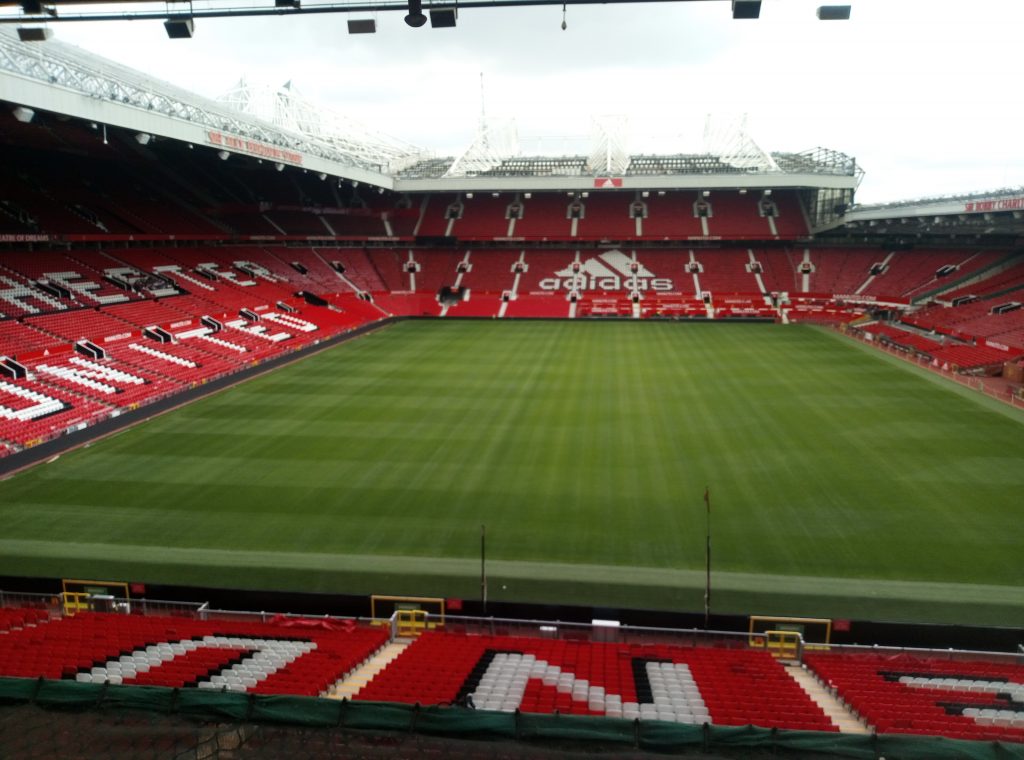 Heightsafe have installed multiple Roof Access and Mansafe Systems at Old Trafford as part of remedial works and new system installations. In addition, Heightsafe have completed the annual retest of all systems as part of their compliance work since 2016, and other ad-hoc repairs where required. 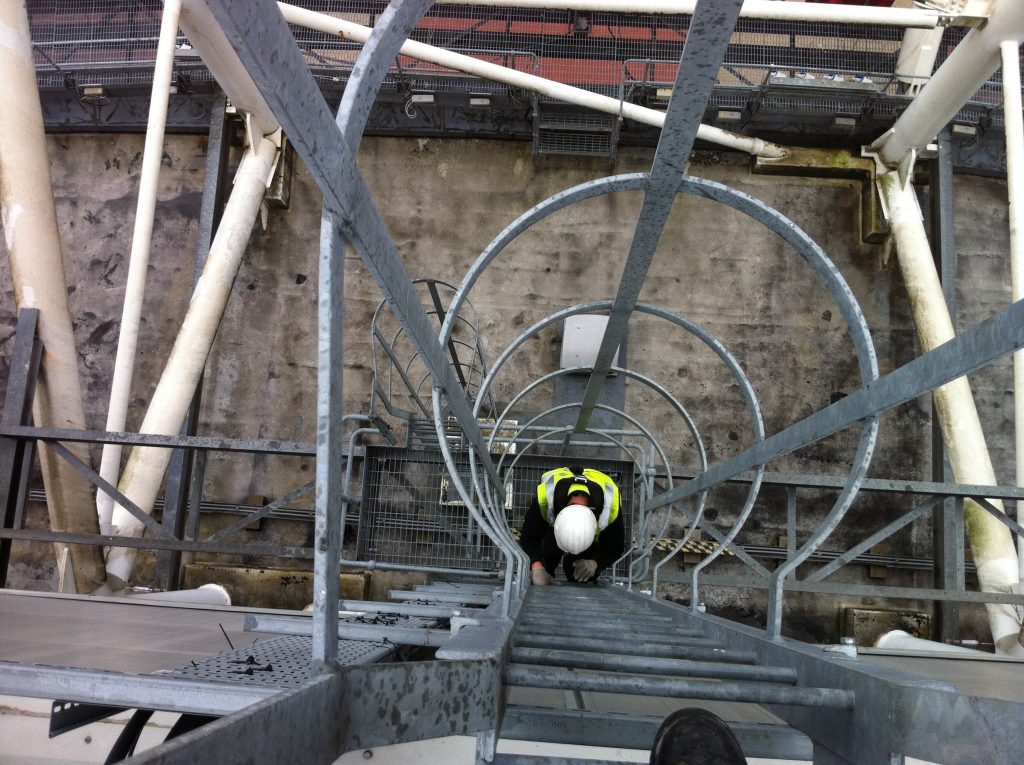 To comply with legislation surrounding Work at Height Systems, all systems including Walkways, Access Ladders, Safety Lines, Guardrails, Eyebolts and Anchor Points at Old Trafford have been tested in accordance with the relevant standards. The systems that are tested feature across multiple areas of the stadium including all four stands, the gantry, camera access points, the Busby Memorial, ticket office and Manchester Suite. Some systems required access via a MEWP (Mobile Elevator Work Platform/ cherry picker). 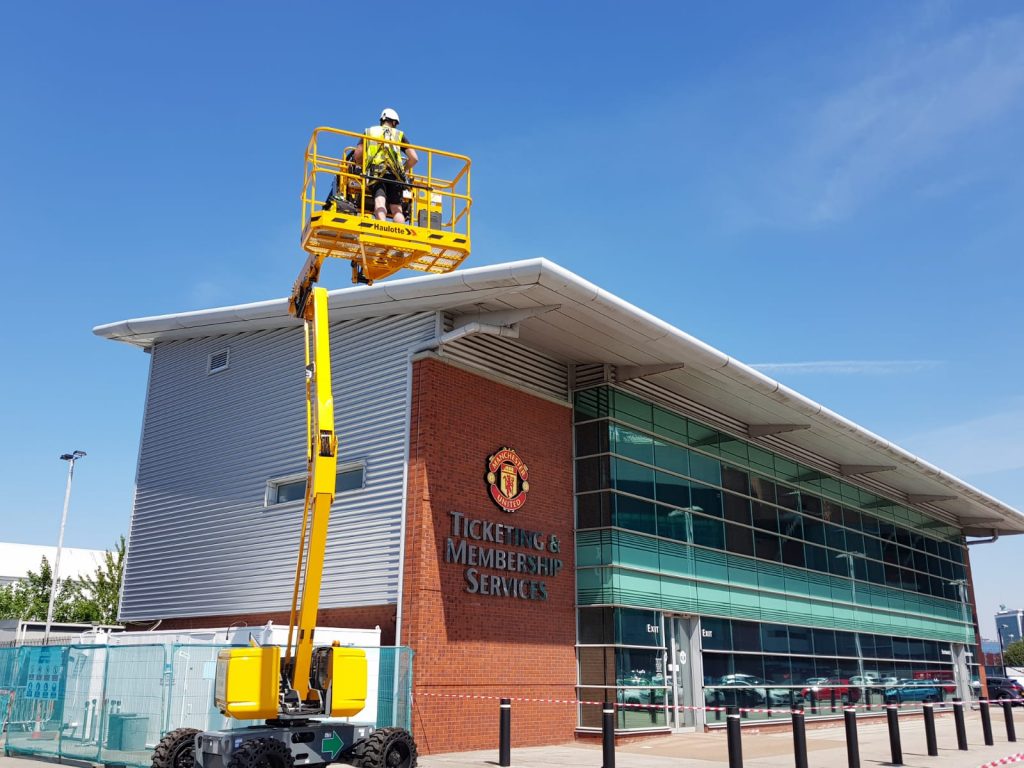 Liverpool FC have called Anfield their home for almost 130 years since the club’s inception in 1892. Before then, Everton played at the stadium from 1884 – 1891 until they moved into Goodison after it was built in 1892. The stadium has a current seating capacity of over 53,000, with plans to expand the stadium beginning back in 2014 through the expansion of the Main Stand, and more recent development plans to expand the Anfield Road stand and have the potential to take the capacity to exceed 61,000.

The stadium has recently began to host concerts and has seen the likes of Bon Jovi, P!nk and Take That take to the hollowed turf of Anfield, as well as hosting various other corporate and social events.

Heightsafe were called to attend to complete remedial works on the stadiums bird netting, after damage was caused presumably by a bird flying into the netting and tearing it from it’s fixings. The area near the plant room was only accessible via abseiling from the roof to complete repairs, and so Heightsafe’s specialist Work at Height operatives were required to attend.

Heightsafe’s technicians are experienced and skilled to carry out Rope Access Maintenance Services, and did so with ease, providing a cost effective, non-disruptive and safe solution.

Charlton Athletic has called The Valley home since 1919, not counting the years they were exiled from the stadium and forced to form an agreement with Crystal Palace and shared Selhurst Park, and later Upton Park with West Ham before they returned to The Valley. A huge clean up and rally from the fans saw The Valley Party formed to push ahead with their plans to regenerate the stadium back to it’s former glory as it stands today. The stadium now has a capacity of 27,000 people, and is situated in South East London, not far from the O2 Arena. 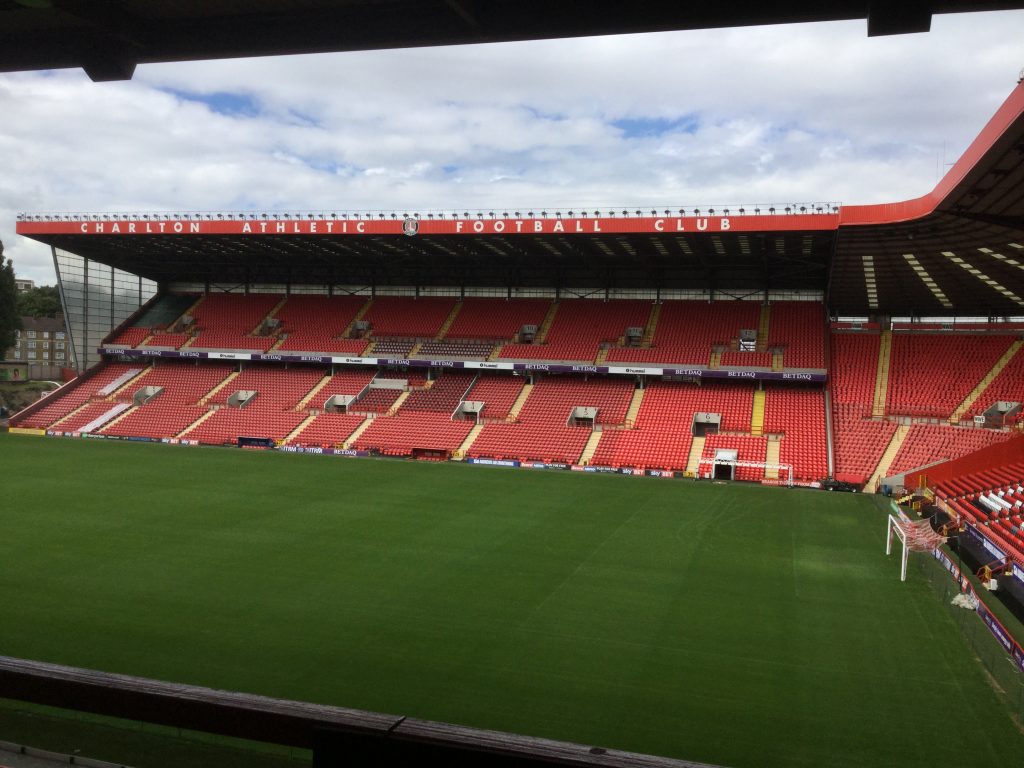 Heightsafe have attended the Valley to carry out annual compliance testing since 2016, on Mansafe systems and Lightning Protection Systems. Teams have also carried out Lightning remedial work and other repairs to netting and cladding.

Testing is completed on gantry platforms, access ladders and safety lines across the stands of the stadium and the commentary and big screen area. All systems are tagged to show the date the inspection was carried out and any systems that are damaged or unusable signify the fact until they can be remediated.

Lightning Protection Systems at stadiums are an important consideration due to the size of the structure, how open they are and most notably the number of people that gather there in one place. Precautions must be taken by the stadium so that in the event of a lightning storm, they have taken appropriate action beforehand to ensure the safety of the thousands of spectators in their grounds. Charlton have employed the services of experts at Heightsafe to carry out testing on all Lightning Protection Systems in line with current recommendations and standards IEC/BS EN 62305:2011 parts 1-4 or NFC-17-102:2011. 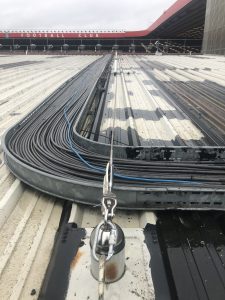 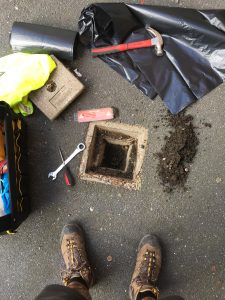 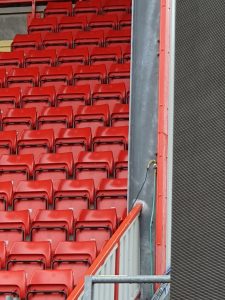 If you require Compliance Testing on Mansafe or Lightning Protection Systems, or if you are unsure if any of your current systems require remedial or repair work to ensure the safety of those who use them at your premises – get in touch with our team today who can assist you. Alternatively call us on tel: 020 3819 7199.

Working with our partners, XSPlatforms, we discuss the key differences between a Lifeline System and a Rail System.

Working with our partners, XSPlatforms, we discuss the key differences between Fall Restraint and Fall Arrest. 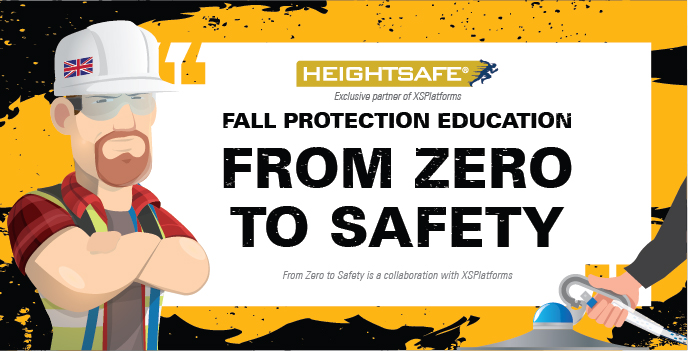 Why From Zero to Safety?

Working with our partners, XSPlatforms, our new blog series will take you from Zero to Safety!

Need Compliance Testing for Your Building?

Get in touch with Heightsafe's friendly, professional team today for free, no obligation advice on your compliance testing and inspection requirements.