The English Premier League 2021/22 season starts over the next couple of days, and fans will once again be able to visit their team’s home ground and witness The Beautiful Game in all it’s glory. In their inception, England played all of their home games in club stadiums across the country, many of which we have had the pleasure of working on.

We have completed stadium installation works at Old Trafford, The Valley and Tottenham Hotspurs Stadium to name but a few.

Old Trafford – home to Manchester United is the largest club football stadium in the UK with a capacity of almost 75,000 people. “The Theatre of Dreams” continues to evolve since its inception in 1910 and has benefited from many expansions and improvements. In 2019/20 season alone there has been £20m investment, including improvements to accessibility facilities, security updates, enhanced media facilities and other upgrades in the club’s commitment to improve the stadium whilst maintaining what makes it so special to fans who visit.

Heightsafe have worked with Manchester United since 2016 to carry out various compliance testing along with other installations. In 2018, we completed remedial works to existing mansafe systems, including replacing a corroded access ladder on the Sir Bobby Charlton Stand, as well as various bespoke remedials to other ladders, guardrails and safety lines that made the original systems unsafe and non-compliant.

In 2020, Heightsafe were called on again to complete multiple installations of mansafe systems including safety lines and guardrails across the stands in the stadium. Multiple Safety Lines were installed at all four Stands, with all systems installed and tested to EN795 Class C. Guardrails were installed at the East and West stands with all components in accordance with BS 14122-3:2001 and BS 6180:2011, as well as self-closing gate kits in accordance with BS EN 13374 Class A. An ‘up and over’ platform was installed to clear an obstruction, as well as over 250 metres of additional clamped rail added as a mid-rail to a non-compliant existing guardrail not installed by us. Full PPE kits were provided for attachment to the safety lines.

The work completed allowed for safe access for all operatives to gain entry to electrical boxes, change cameras at roof level, maintain and clean lighting systems as well as speakers/ PA and other systems. 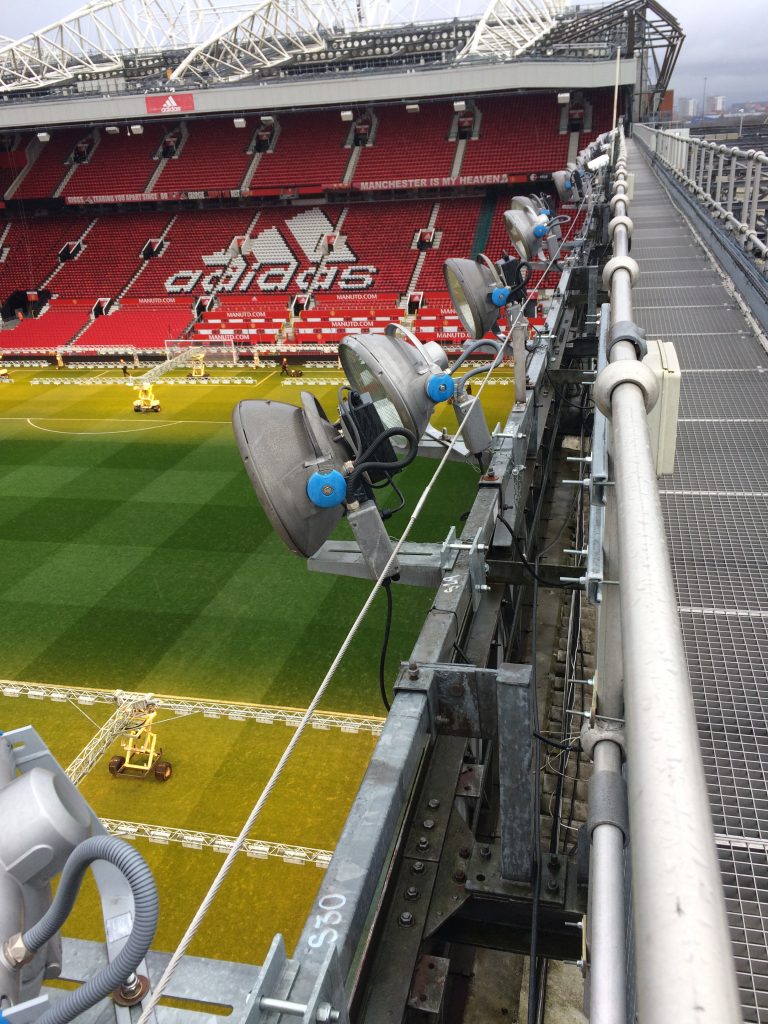 Heightsafe were also asked to provide updated Eyebolts for operatives to attach themselves to when changing the flowers at the Busby Memorial, allowing it to be done safely and efficiently. 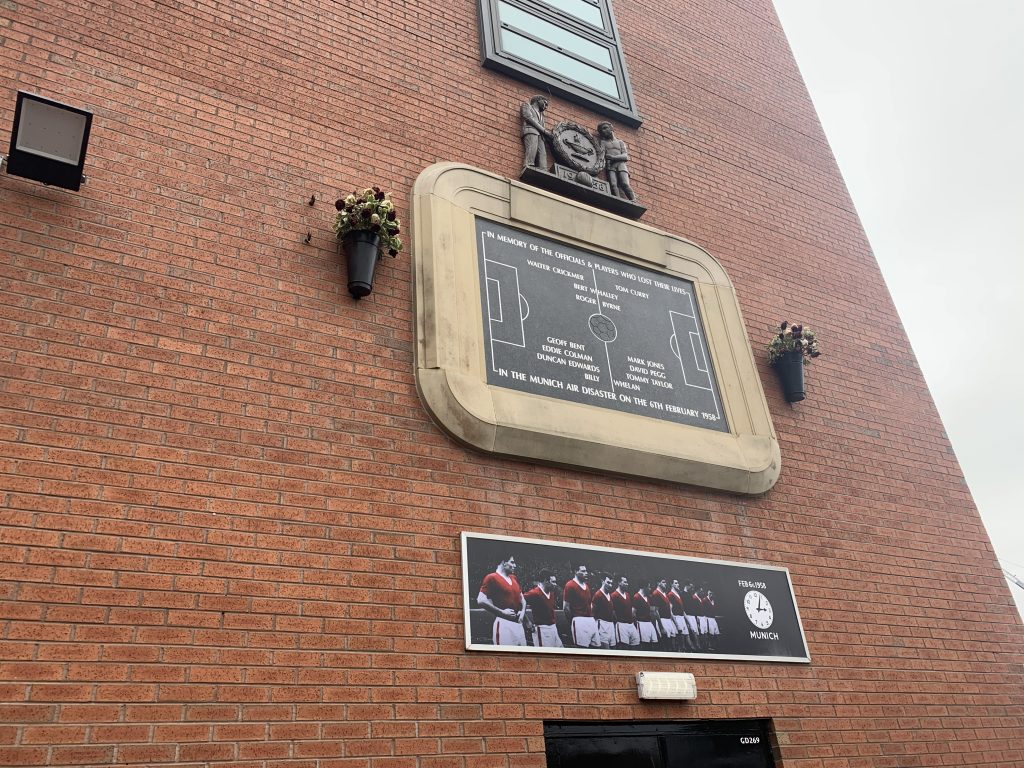 The Valley at Charlton Athletic is one of London’s most iconic football venues – just a stone’s throw from The O2 Arena in South East London, and the club’s home for over 90 years, the stadium has experienced a tumultuous journey to get to where it is today – with a huge thanks to the clubs fans for persisting against all odds to get the stadium safe and back as Charlton’s home.

After Charlton were exiled from The Valley back in 1985, supporters volunteered to clean up the ground but there were safety concerns due to the stadium being neglected in the club’s absence. The fans formed the Valley Party and plans were eventually accepted to allow works on the stadium to commence. 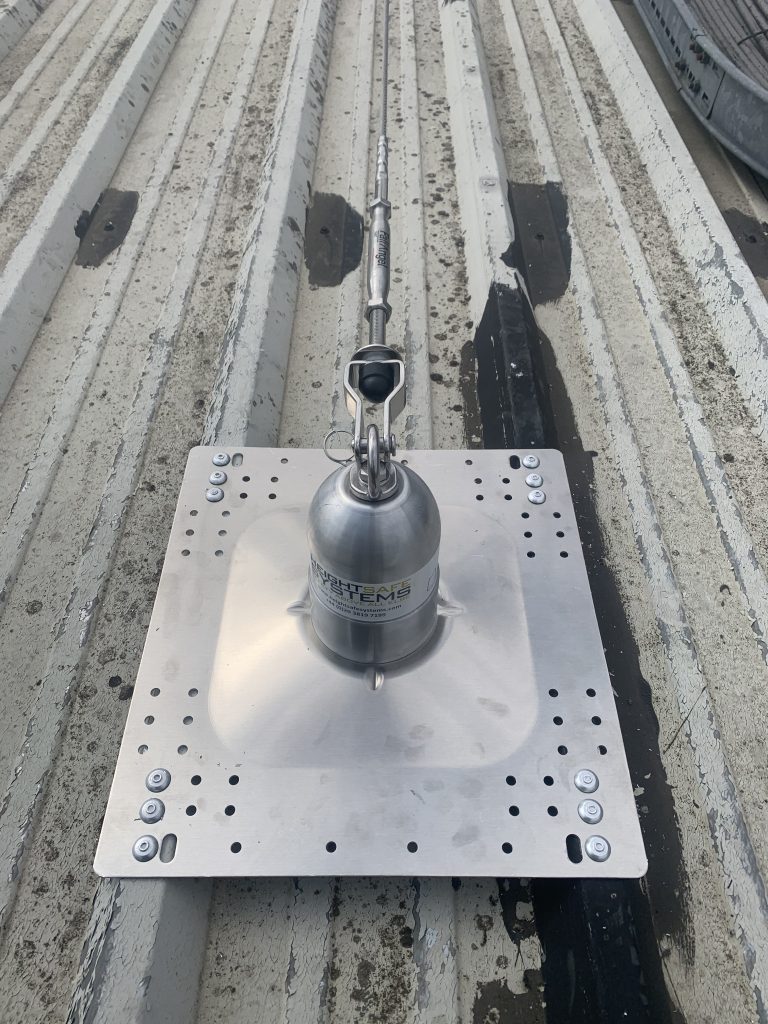 Heightsafe have visited The Valley at least 15 times since 2016 to complete works including compliance testing, lightning protection and installation of safety lines. Our teams attended site at Charlton only last month to carry out Safety Line remedial works. The North and East Wing benefited from Safety Line Installations fixed to the metal deck roof sheet, with all systems conforming to EN795 Class C. Remedial works to existing safety lines were conducted with to allow the cable to navigate through an obstruction. Work was also completed in 2019 to install an extension ladder along with other Safety Line remedials.

The systems were installed to safely allow maintenance of the roofs, floodlights, and guttering. With the help of Heightsafe’s expert teams, The Valley is now one of the safest stadiums to be – a far cry from it’s neglected state back in 1989.

Tottenham Hotspur Stadium – formerly White Hart Lane is the largest club stadium in London. Situated in North London, it has been designed to be a multi-purpose stadium with a retractable football pitch to reveal a synthetic pitch underneath for concerts, NFL games and other events. The new world-class stadium opened in 2019, complete with café, shop, museum and their ‘Dare Skywalk’ attraction where visitors can take in stunning views of the surrounding London skyline and the stadium itself.

Heightsafe were instructed to install a Safety Line System in the surrounding roof area to allow for maintenance to be carried out. The roof Standing Seam sheets did not run parallel with the edge of the roof, and so the Safety Line solution Heightsafe provided had to curve and be installed closer to the edge of the sheet to ensure the distance from the Safety Line to the edge was the same throughout, whilst also ensuring Height Safety. A specially tailored PPE kit was also supplied to cater for this bespoke solution. All systems were installed and tested to EN795 Class C. 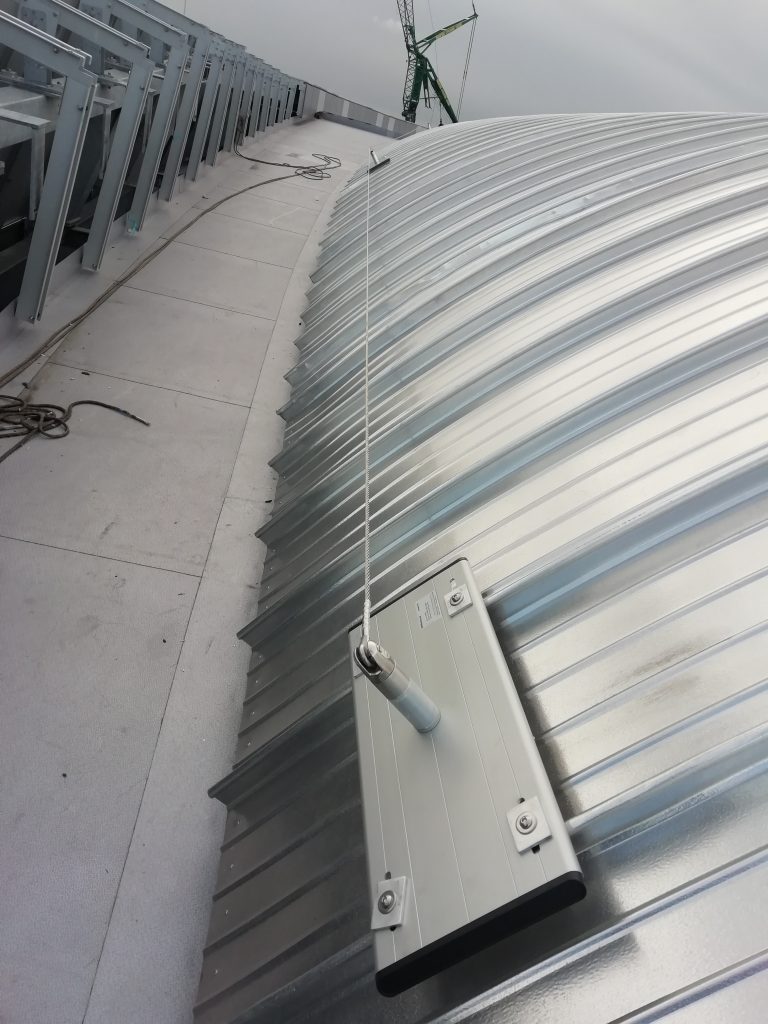 Additionally, Heightsafe were called upon to install the Guardrail surrounding the planter access next to the visitor steps last year. The guardrail allows gardeners and maintenance workers to look after their greenery and keep the stadium looking neat and tidy – all whilst staying safe working at height. 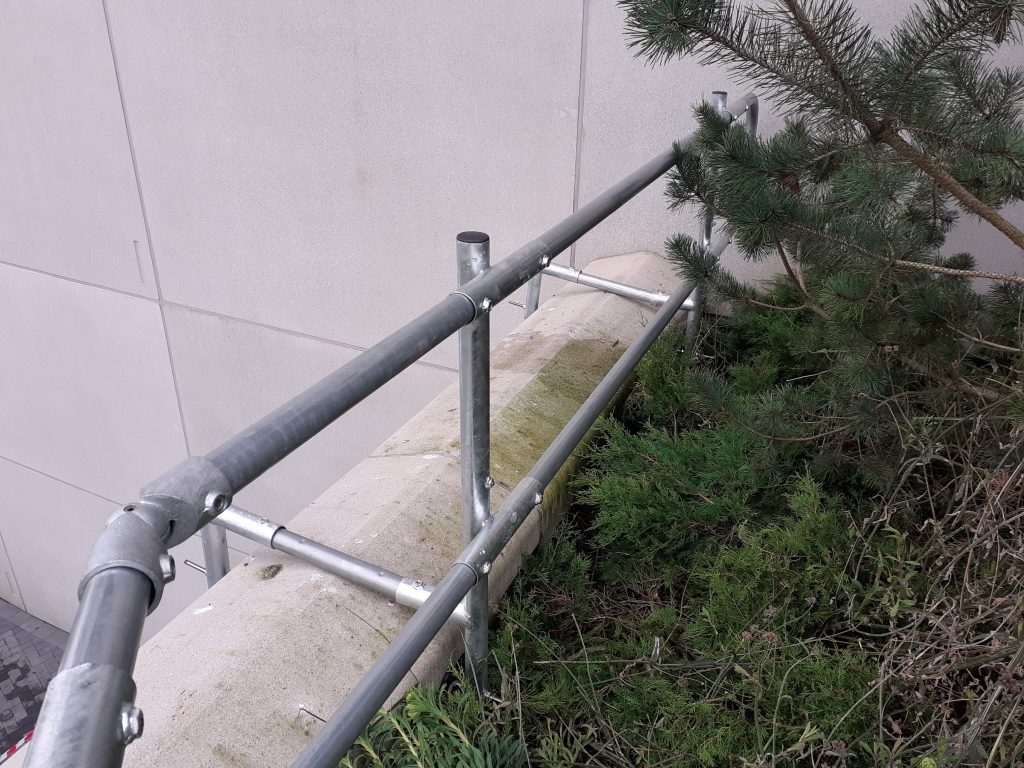 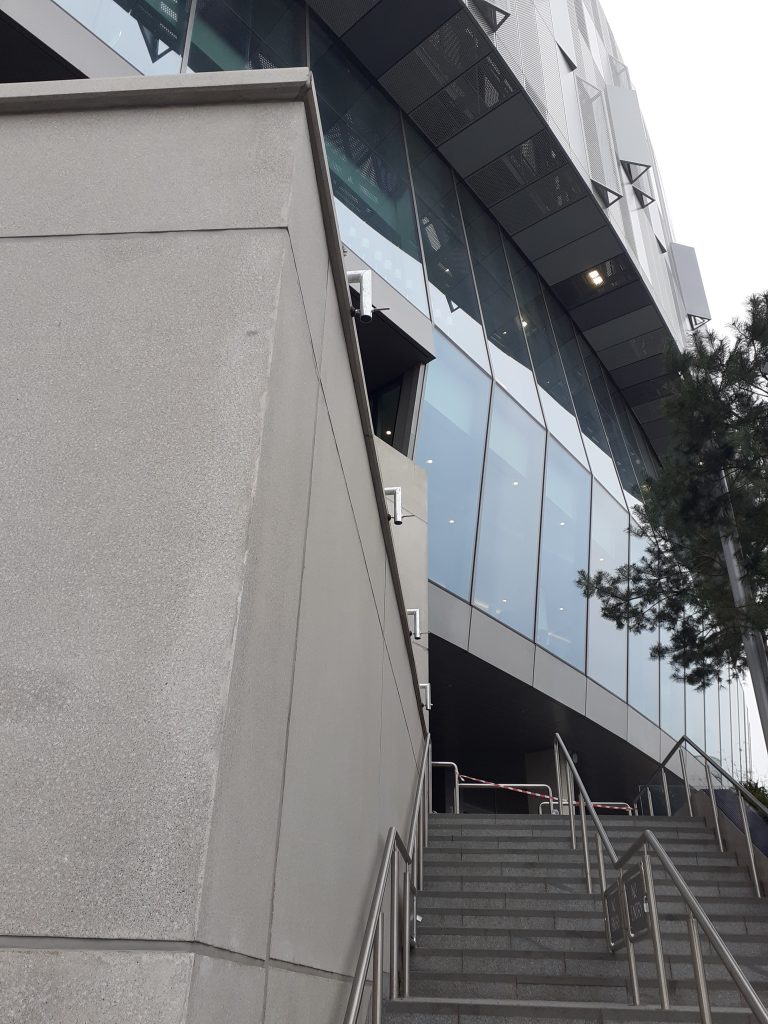 If you require a Safety Line, Guardrail or any other Mansafe Installation to ensure the safety of maintenance workers at your premises – get in touch with our team today who can assist you. Alternatively call us on tel: 020 3819 7199. 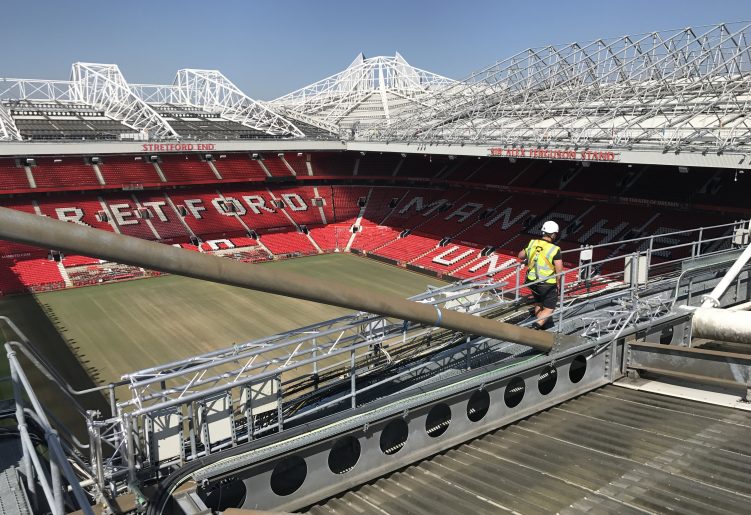 The Euros have this year been played in stadiums across Europe – 11 in fact, with the final culminating here in the UK at Wembley. 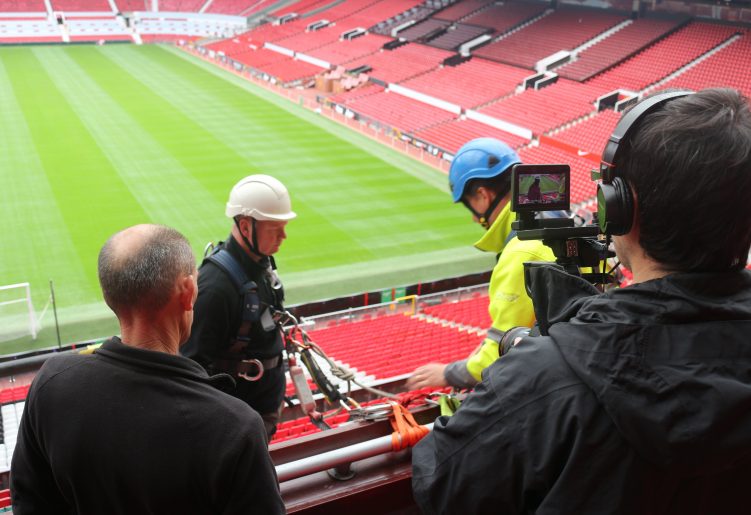 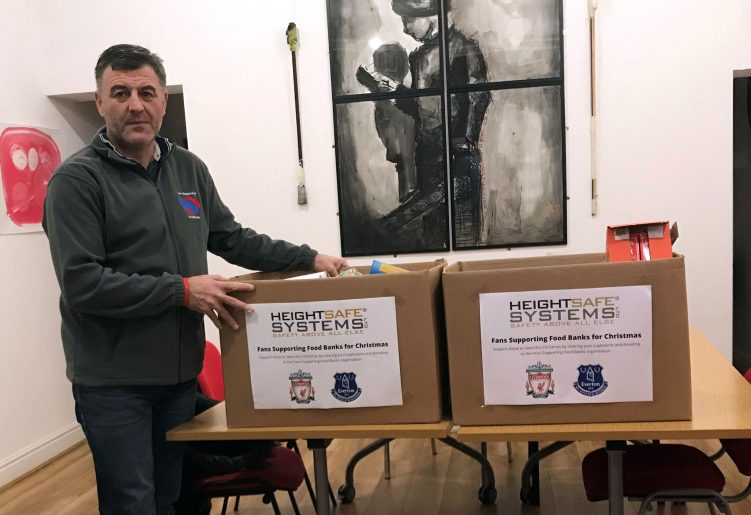 Throughout December 2018, Heightsafe’s Wirral based Head Office team pulled together to [...]

Need Installation Works at your Stadium?

Get in touch with Heightsafe's friendly, professional team today for free, no obligation advice on which systems will be most suitable for your needs.