It is a myth that lightning never strikes twice and The Empire State Building, which stands at 102 stories high, is no stranger to this. 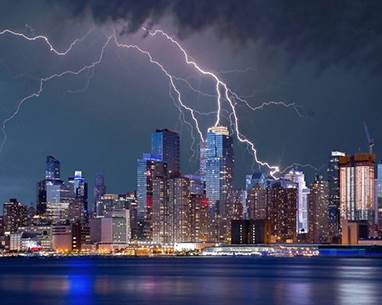 It is a myth that lightning never strikes twice and The Empire State Building, which stands at 102 stories high, is no stranger to this. It is reported that the building gets struck by lightning around 23 times per year, so it’s no surprise the building has extensive lightning protection installed. However, without regular testing and inspection of its lightning protection systems, the various elements of the Empire State Building – physical assets and electronic systems as well as occupants, would all be exposed to the dangers of a lightning strike.

These dangers are many and varied, although fire is one of the most serious risks associated with lightning strikes. This menace is multiplied several fold in multi-storey buildings where there are relatively fewer escape routes and a greater concentration of people.

Surprising to many, it’s not just tall buildings that require lighting protection as well as regular testing and inspection of this equipment. Smaller buildings are at risk too. Take for example this Tesco supermarket store in Lincolnshire, which had to be evacuated after lightning struck the roof, causing flooding inside. The deluge was caused when the lightning bolt destroyed part of the roof, channelling run off from other areas directly into the store.

There are a number of dangerous effects of a lightning strike, not only the direct strike point itself, which can cause considerable damage as seen at the Tesco store, but also the secondary effects. For example, the sudden electrostatic discharge from a lightning strike can knock out electrical and IT system. If you are a business that relies on these systems to trade, a lightning strike can be very disruptive and costly.

All Lightning Conductor systems installed post 2008 are required, under the Electricity at Work Regulations 1989, to be tested in accordance with BS EN 62305:2011. The act maintains that it is the duty of the employer / self-employed individual to comply with regulations and ensure that all lightning protection equipment is tested and inspected at fixed intervals, not exceeding 12 months.

Here at Heightsafe Systems, we recommend that retests of lightning protection systems are conducted every 11 months to ensure that your lightning conductor is fully compliant all year round. All of our lightning protection specialists have undergone extensive training in line with BS EN 62305:2011 and can provide a full turnkey package or a standalone service. Following the completion of the tests, we provide clients with certificates that confirm the equipment is compliant. If any remedial works are required, such as replacing or upgrading existing equipment we can carry this out, after providing a full written quote.

Lightning conductor tests can also be combined with annual or 6 monthly inspections of your work at height safety lines, eyebolts, abseil points, access ladders, personal protective equipment (PPE) or edge protection – saving you money by doing all these mandatory requirements in a single visit, and rather than using multiple suppliers.

If you would like some more information about our lightning protection testing and maintenance services, please get in touch on: 020 3819 7199 or contact us here.